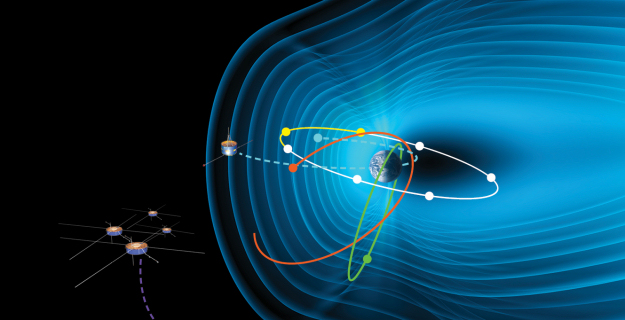 An unusual magnetic storm has been studied in detail using measurements from 12 spacecraft operating in the Earth's magnetosphere.

ESA's four Cluster spacecraft (purple) were in the solar wind, directly upstream of Earth; the Chinese-ESA Double Star TC-1 spacecraft (blue) was passing from the outer region of the planet's magnetic field (the magnetosheath) and entering the magnetosphere; the Imager for Magnetopause-to-Aurora Global Exploration (IMAGE) satellite (green), GOES (yellow), and five geosynchronous satellites from Los Alamos National Laboratory (white) covered complementary regions. The Solar and Heliospheric Observatory (SOHO) and Advanced Composition Explorer (ACE) were located at the Sun-Earth L1 Lagrange point and are not shown in this figure. The orbit of the Polar spacecraft (orange) is included for completeness although the data was not used in this study.

This is a schematic representation and is not to scale.