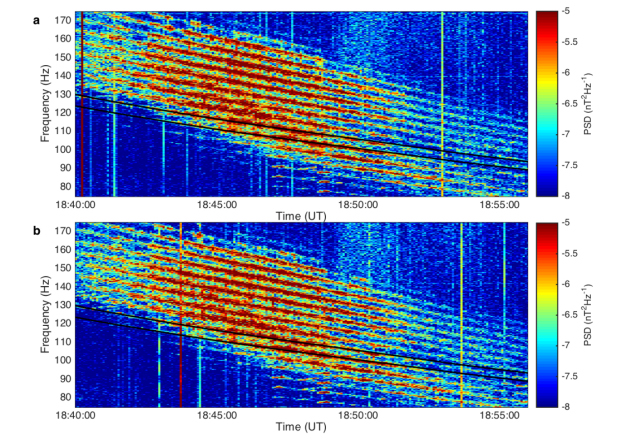 The type of plasma waves known as equatorial noise, was observed on 6 July 2013 by the Spatio-Temporal Analysis of Field Fluctuations (STAFF) instrument on (a) Cluster 3 and (b) Cluster 4. The figure shows the colour coded magnetic field Power Spectral Density (PSD) as a function of time and frequency.

The data clearly reveal the harmonic structure of the equatorial noise: the spectral lines show multiples of the frequencies of the circular motion of protons in the presence of a uniform magnetic field – the so-called proton gyrofrequency.

The 20th and 21st multiples, or harmonics, of the proton gyrofrequency are marked by solid black lines. Above them, the harmonics up to 30th are clearly seen and traces of a few even higher harmonics can be discerned.

This previously unobserved, well organised, and periodic structure provided definitive evidence that the waves were generated by protons.

The observations were made when the four Cluster spacecraft were flying through the Earth's outer radiation belt, close to the geomagnetic equator. At the time, Cluster 3 and Cluster 4 were within 60 km of each other.