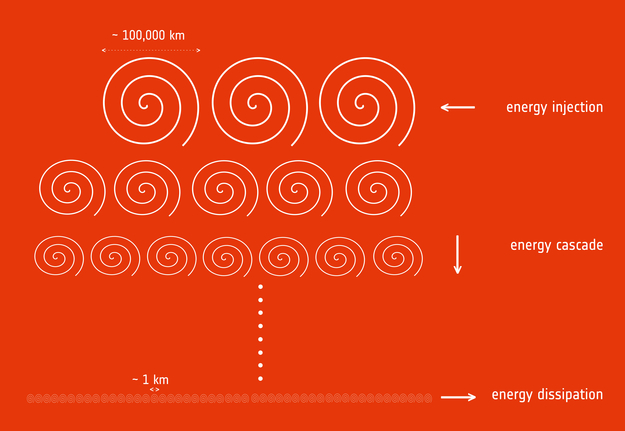 Schematic illustration of the process of energy cascade in a turbulent plasma, such as that found in Earth's magnetosheath, the boundary region between the solar wind and the magnetosphere around our planet.

Energy is injected to the plasma on scales of hundreds of thousands of kilometres, then density and magnetic fluctuations in the highly turbulent medium cause it to cascade to smaller and smaller scales, until it is dissipated to particles at scales around one kilometre.

A study based on data from Cluster and NASA's THEMIS mission has estimated how much energy is transferred from larger to smaller scales within the magnetosheath, revealing that turbulence is the key, making this process a hundred times more efficient than in the solar wind.

This study indicates that about 10-13 J of energy is transferred per cubic metre every second in this region of Earth's magnetic environment.