Shocks in the Universe

Shocks in the Universe 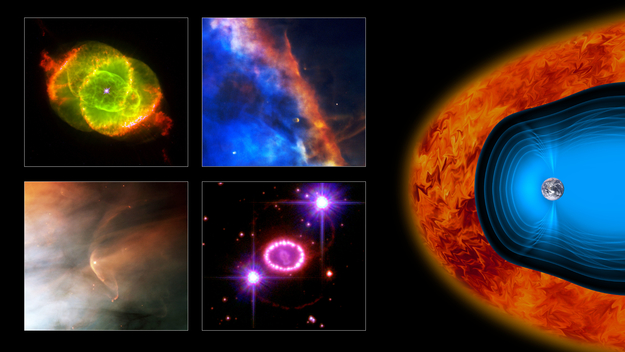 This composite image shows a variety of different 'shocks' throughout the Universe. Such shocks form when a supersonic – faster-than-sound – flow encounters an obstacle, and are seen often in the Universe around stars, supernova remnants, comets, and planets – including our own.

Clockwise from top left, the four framed images on the left show the Cat's Eye Nebula (NGC 6543), a complex planetary nebula comprising intricate, concentric shells of gas and high-speed jets; a hypersonic shock wave in the star-forming region of the Orion Nebula; the remnant of a once-massive star, a supernova, known as SN 1987A, and one of the brightest exploding stars spotted in the past four centuries; and a bow shock around a young star named LL Ori, located in the Great Nebula in Orion. All of these phenomena, observed by the NASA/ESA Hubble Space Telescope, are sculpted by fast outpourings of material colliding with the surrounding medium, creating complicated, detailed structures in space.

The illustration on the right depicts the bow shock around Earth, our planet's shield against cosmic radiation and a giant particle accelerator that transfers and redistributes energy throughout space. Shocks are known to be very efficient particle accelerators, and potentially responsible for creating some of the most energetic particles in the Universe.

Using data from ESA's Cluster mission, scientists have revealed the mechanisms at play when this shock transfers energy from one type to another, finding direct evidence of small-scale structures within Earth's magnetic field that are key in helping waves of plasma to 'break'.