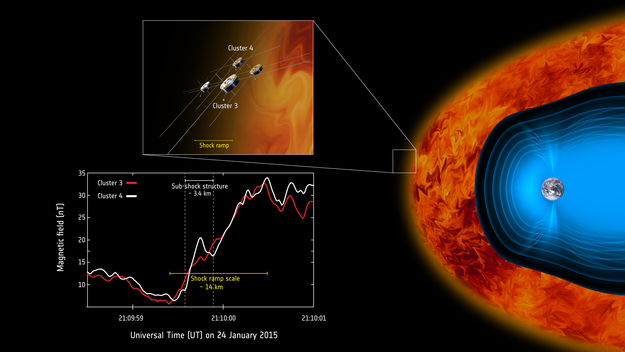 Using data from ESA's Cluster mission, scientists have revealed the mechanisms at play when our planet's bow shock – its 'shield' against cosmic radiation and an efficient particle accelerator – transfers energy throughout space.

The illustration on the right depicts this bow shock. Such shocks, observed across the cosmos, are known to be very efficient particle accelerators, and potentially responsible for creating some of the most energetic particles in the Universe.

The new study found direct evidence of small-scale structures within Earth's magnetic field that are key in helping waves of plasma to 'break'. These waves behave somewhat like a wave in the sea: as a wave approaches the beach, it seems to grow in size as the depth decreases, until it breaks. This is because the crest of the wave moves faster than the trough, causing it to fold over and break. This kind of 'breaking' also occurs – albeit in a more complex way – for waves of plasma, redistributing energy in the process.

The inset in the upper left shows an artist's impression of the four Cluster spacecraft, as two of them (Cluster 3 and Cluster 4) took measurements within a particularly thin and variable part of the shock known as the shock ramp on 24 January 2015. The two spacecraft were sitting just 7 kilometres apart, taking in-situ measurements at a never-before-achieved close separation.

The graph to the lower left relays the two sets of measurements of the magnetic field – one plotted in red (Cluster 3) and one in white (Cluster 4). Differences in the measured field provide evidence that small-scale magnetic field structures exist within the broader extent of the bow shock. These small structures are key in facilitating the breaking of plasma waves within the shock, and thus the transfer of energy, in this portion of Earth's magnetic environment.