Cluster and the Van Allen Probes in Earth's magnetosphere

Cluster and the Van Allen Probes in Earth's magnetosphere 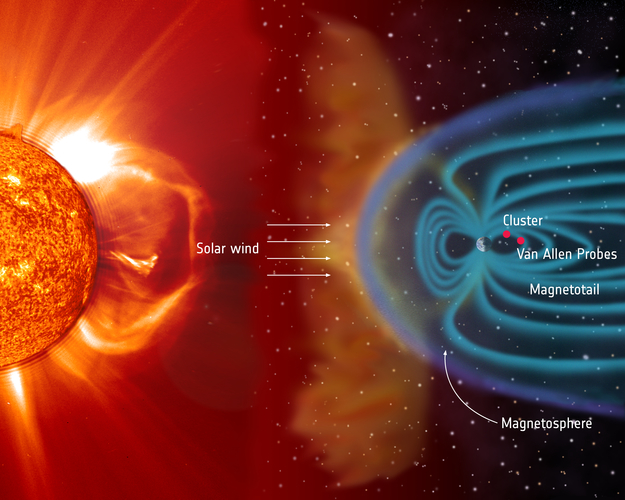 The Sun constantly bombards Earth with a flow of charged particles known as the solar wind. Powerful shocks arising in this flow can cause disturbances in Earth's magnetosphere – the protective bubble created by our planet's magnetic field – which are known as geomagnetic storms.

The approximate positions of ESA's Cluster and NASA's Van Allen Probes spacecraft are indicated in this illustration. They refer to the spacecraft positions on 26 February 2001 (Cluster) and 1 June 2013 (Van Allen Probes) when kinetic-scale field line resonances were observed from both missions when on the same field line and under similar magnetospheric conditions.

Combining these measurements, scientists have revealed important details about how electrons interact with waves in Earth's magnetic environment. This research helps explain the behaviour of particles during geomagnetic storms and has significant implications for our understanding of space weather, which is in turn necessary to help protect space technology from the potentially harmful effects of energetic particles generated during such storms.