The hardware inside a Chinese space satellite is currently undergoing its final tests in London to make sure that it can 'talk' with the European science instruments it will be carrying, in advance of its mission launch in 2003.

37 scientists from the Chinese Academy of Sciences (CAS) have spent the last three weeks in a converted seminar room at Imperial College London carrying out the pre-integration of European Space Agency (ESA) instruments set to be carried aboard the CAS Double Star mission next year.

Double Star follows in the footsteps of ESA's Cluster mission, which is studying the effects of the Sun on the Earth's magnetosphere - the magnetic bubble that protects the Earth from the worst effects of solar storms.

In a unique move, and to meet a tight mission schedule, instrument-builders and researchers at Imperial proposed that the pre-integration, the first meeting of European instruments with the brain of the Chinese spacecraft, be done in Europe, the home of five of the instruments, rather than in China, where the satellites are being built.

The Chinese spacecraft systems arrived on 16 September and were welcomed on the long, copper-covered analysis table by the first test instrument, the Fluxgate Magnetometer Instrument from Imperial.

As the Chinese hardware and the European instruments are wired together, a computer simulates space conditions outside the satellite and performs data and power system tests to check whether the equipment will function happily together.

In total over 50 European and Chinese space engineers have been working on the pre-integration, which concludes on 13 October. 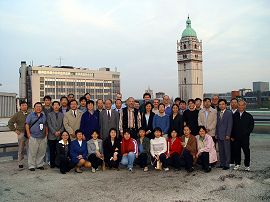 Some of the team working on the Double Star mission.

So far, all activities have been running very well and even a few days ahead of schedule, says Chris Carr, Principal Investigator for the Magnetometer Instrument, and research officer at Imperial. All the European teams are satisfied with the results of the tests and are very impressed with the dedication and professionalism of their Chinese counterparts. Theres been a great spirit of cooperation, which we all hope bodes well for the future, he adds.

The five European scientific instruments (see Notes to Editors) are very similar to the equivalent instruments flown on Cluster, which launched in Summer 2000 - in fact some of the European instruments are 'spare' units from that mission.

The Chinese agency will launch two Double Star spacecraft, one into an equatorial orbit, and the other polar. The orbits are lower than Cluster and will keep Double Star mainly inside the magnetosphere.

Double Star will conduct a number of scientific investigations, most of which will augment measurements coming from the four Cluster satellites. The Equatorial-orbiting satellite will investigate the Earth's huge magnetic tail, the region where particles are accelerated towards the polar regions by a process known as magnetic re-connection.

Professor Peter Knight, Head of the Department of Physics, which is hosting the pre-integration, welcomed the new initiative by which outstanding space scientists in China and at Imperial have been able to come together in this exciting development.

"Space Physics is one of the major themes of the department, with a number of missions looking at planetary and comet systems as well as the interaction of the solar wind with the earth. These missions involve years of painstaking planning followed by keen anticipation of the launch: we have great hopes for this innovative mission," he says.

In July 2001 the European Space Agency (ESA) and the Chinese National Space Agency (CNSA) signed an agreement to develop Double Star jointly. It was designed to promote reciprocal cooperation between space scientists in Europe and China, and also to pave the way for future comprehensive collaboration between the two agencies.