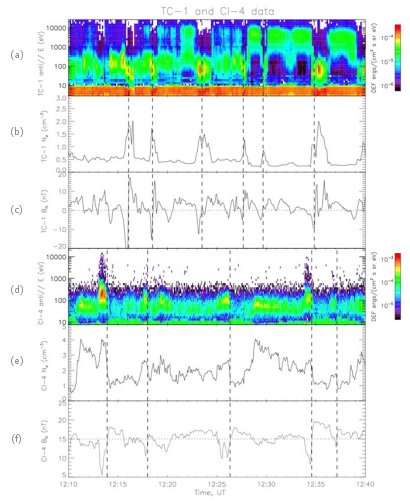 Several studies have shown the existence of pulsed reconnection at the magnetopause producing spatially confined magnetic flux tubes called flux transfer events (FTEs). Typically of a few minutes duration, these FTEs propagate away from the reconnection site and are often used as a tracer of magnetic reconnection.

On 8 May 2004, the four Cluster spacecraft and the Double Star TC-1 satellite were both in the vicinity of the magnetopause and gathered the above observations of FTEs.

The bottom three panels (d, e & f) show the same type of observations taken at the same time by the Cluster 4 spacecraft.