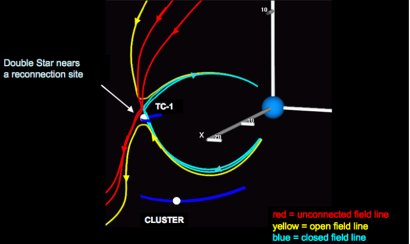 Topology of the magnetic field predicted by a global MagnetoHydroDynamic (MHD) model for 8 May 2004, 10:00 UT when the local magnetic shear angle between the magnetosphere and magnetosheath was ~170°.  Earth is represented by the blue sphere and the locations of the Double Star TC-1 spacecraft and the Cluster quartet are indicated.

The field lines displayed show reconnection occurring just above the equatorial magnetopause, which was being skimmed by the Double Star TC-1 spacecraft. This topology is consistent with fast plasma flows measured by the CIS and Peace experiments onboard TC-1, as well as with the polarities of the numerous FTEs observed on that pass by Marchaudon et al. [2005].