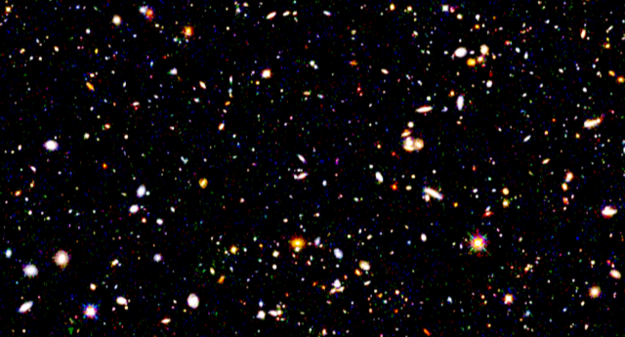 This image provides a taste of ESA's Euclid deep survey, showing a realistic prediction of a small portion of the survey at an intermediate stage. It is based on existing observations from the NASA/ESA Hubble Space Telescope.

The Euclid deep survey will comprise three different fields, with a total area of 40 square degrees. The total survey is equivalent to around 140 000 times the portion of the sky shown in this view, which spans 1.4 arcminutes on the long side (as a comparison, the full Moon spans 30 arcminutes).

The three Euclid Deep Fields provide a window to examine large amounts of galaxies, looking back to the epoch when the first stars and galaxies formed, which occurred in the first billion year of the Universe's history. The small, red galaxies in this view indicate some of the most distant galaxies that the survey will reveal.

This image was created by the Euclid Consortium using Hubble observations of a small portion in the Euclid Deep Field Fornax as part of the Cosmic Assembly Near-infrared Deep Extragalactic Legacy Survey (CANDELS). It is based on real galaxy images in the visible and near-infrared wavelengths to mimic the same colours that Euclid will observe, and was rescaled to the resolution and point-spread function of Euclid.