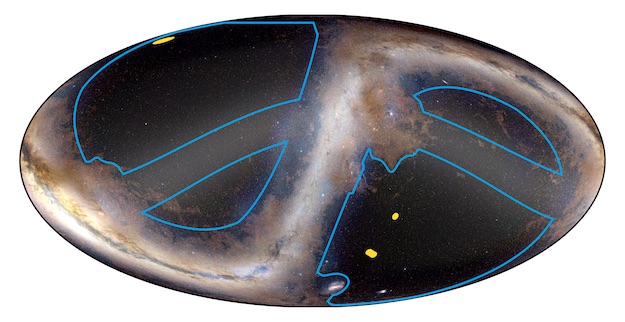 The location of the fields that will be covered by Euclid's wide (blue) and deep (yellow) surveys on a map of the sky, shown in the equatorial coordinate system. The bright, vaguely S-shaped band crossing the image corresponds to the plane of our Milky Way galaxy, where most of its stars reside. The other bright band crossing the image corresponds to the ecliptic – the plane of Earth's orbit around the Sun; the diffuse glow is caused by dust particles in the Solar System.

The four large portions of the sky that will be covered by the wide survey are highlighted in blue in this image. Other regions are avoided because they are dominated by Milky Way stars and interstellar matter, or by the zodiacal light.

The wide survey is complemented by a deep survey, taking about 10% of the total observing time and repeatedly observing just three patches of the sky: the Euclid Deep Fields, highlighted in yellow in this image.