The Euclid wide and deep surveys

The Euclid wide and deep surveys 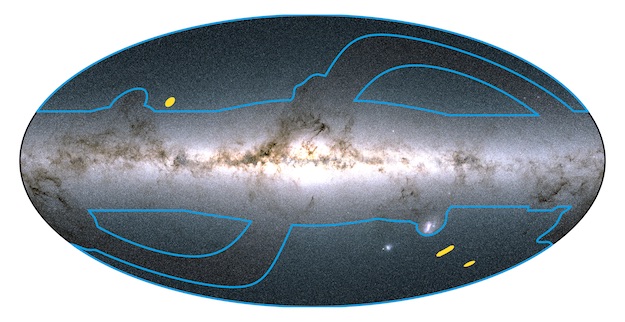 The location of the fields that will be covered by Euclid's wide (blue) and deep (yellow) surveys on an all-sky map based on data from ESA's Gaia mission. The sky is shown in the Galactic coordinate system, with the bright horizontal band corresponding to the plane of our Milky Way galaxy, where most of its stars reside.

Euclid is an ESA mission that will image billions of galaxies across the Universe to investigate the past ten billion years of our cosmic history. The largest fraction of the mission's observations will be devoted to a wide survey, covering about 15 000 square degrees – more than one third of the sky.

The portions of the sky that will be covered by the wide survey are enclosed by blue lines in this image. They comprise the two large portions to the upper left and lower right of the Galactic Centre, and the two smaller portions to the upper right and lower left of the Galactic Centre. Other regions are avoided because they are dominated by Milky Way stars and interstellar matter, or by diffuse dust in the Solar System – the so-called zodiacal light.

The wide survey is complemented by a deep survey, taking about 10% of the total observing time and repeatedly observing just three patches of the sky: the Euclid Deep Fields, highlighted in yellow in this image.