Herschel and XMM-Newton composite image of the Andromeda Galaxy (M31)

Herschel and XMM-Newton composite image of the Andromeda Galaxy (M31) 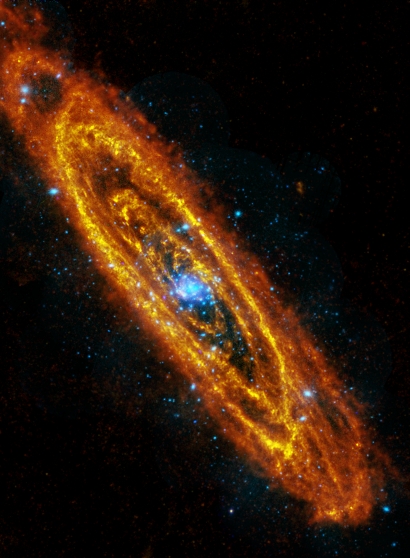 This composite image shows the Andromeda galaxy, also known as M31, the nearest major galaxy to the Milky Way, as observed by the two ESA space observatories Herschel (shown here in red and orange) and XMM-Newton (shown here in blue and white).

Due to its proximity to us, Andromeda is ideally suited for investigations of star formation and evolution on the global scale of an entire galaxy similar to our own Milky Way with a degree of detail that cannot be achieved through observations of other, more distant galaxies.

Observing the Universe at far-infrared and submillimetre wavelengths, Herschel is sensitive to the cold material that represents a window on the early phases of the formation of stars.

The data collected by Herschel in the far-infrared domain probe the cold dust component of the interstellar medium (ISM), the mixture of (mostly) gas and dust from which new stars originate in galaxies. The dust, heated by young and massive stars as they form, shines brightly in the wavelength range explored by Herschel and traces the overall distribution of the ISM, revealing its intricate structure. The image highlights how the mixture of dust and gas in M31 is organised in at least five concentric rings.

The image shown here, the most detailed ever obtained of M31 at a far-infrared wavelength of 250 micron (500 times longer than that of yellow light), was taken with the SPIRE instrument on board Herschel, and is based on a total observing time of 18 hours. The field of view of the image shown is 1.5×2 degrees, although a larger area was actually observed.

In contrast, XMM-Newton, probing the X-ray portion of the spectrum, is sensitive to highly energetic phenomena typical of the latest evolutionary stages of stellar life. This short-wavelength radiation is either emitted by stars close to the end of their life cycle or by the remnants of stars that have already died. The XMM-Newton image has been generated from data obtained with the EPIC camera in the 0.3-7.0 keV energy range, corresponding to wavelengths of 1.8-41.3 Ångstroms. This deep map of M31 is the result of a few tens of observations performed between 2000 and 2010, with a total observing time of more than 2 million seconds, equivalent to over 20 days; different amounts of time were spent observing different regions of the galaxy.

Combined, these two images taken by Herschel and XMM-Newton offer us a comprehensive view of the evolution of stars in the Andromeda galaxy. By highlighting both the stars that once were, in the X-rays, and the stars that will be, in the far-infrared, the composite image tells the entire tale of star formation within Andromeda, from the cold material where stars are born all the way to the remnants of stellar demises which, in turn, influence the ISM and contribute to shape the birth of future generations of stars.

M31 in Infrared, X-ray and Optical

Andromeda's once and future stars