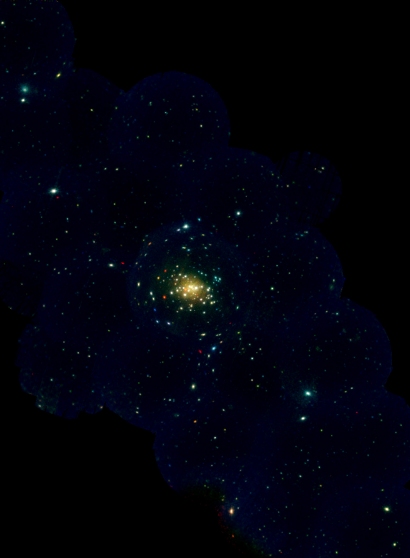 This image shows the Andromeda galaxy, also known as M31, the nearest major galaxy to the Milky Way, as observed by ESA's X-ray observatory XMM-Newton.

By targeting radiation in the X-ray portion of the electromagnetic spectrum, XMM-Newton is sensitive to highly energetic phenomena typical of the latest evolutionary stages of stellar life. The XMM-Newton data have been gathered by the EPIC camera in the 0.3-7.0 keV energy range, corresponding to wavelengths of 1.8-41.3 Ångstroms. In this image sources are shown with different colours, according to their energetic output: red corresponds to 0.3-0.7 keV, green to 0.70-1.2 keV and blue to 1.2-7.0 keV, whereas white corresponds to those sources that are detected with comparable intensity in all three energy intervals. This deep map of M31 is the result of a few tens of observations performed between 2000 and 2010, with a total observing time of more than 2 million seconds, equivalent to over 20 days; with different amounts of time spent observing different regions of the galaxy.

Amongst the hundreds of sources revealed by XMM-Newton, those shown in red are low-mass objects, emitting only low-energy X-rays. Some of these sources, referred to as novae, are binary systems comprising a white dwarf star that is gradually accreting material from its companion. In these systems, the white dwarf may eventually grow massive enough to collapse catastrophically and explode as a so-called type-Ia supernova. In contrast, the objects shown in blue emit highly energetic X-rays and are likely binary systems in which a neutron star or a black hole, formed by the demise of a very massive star, rotates around a normal star. Other sources present in the image are supernova remnants (SNR), remains of the powerful explosions through which massive stars end their life.

By probing the latest stages of stellar evolution, which have also a major impact on the birth of future generations of stars via the mass and energy released by supernovae in their surroundings, XMM-Newton offer us an exceptional view of the evolution of stars in the Andromeda galaxy.