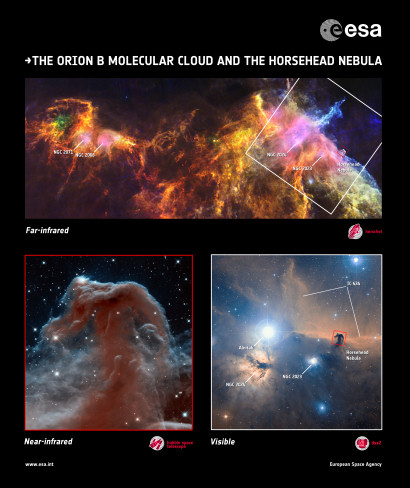 This composite image shows the Orion B molecular cloud region as observed in different portions of the electromagnetic spectrum. The far-infrared image of the cloud (upper panel) is based on data from ESA's Herschel Space Observatory; the visible-wavelength image showing a portion of the cloud (lower right panel) was taken with ground-based telescopes as part of the Digitised Sky Survey; the detail showing the the Horsehead Nebula (lower left panel) was taken at near-infrared wavelengths using the NASA/ESA Hubble Space Telescope.

Upper panel: The Orion B molecular cloud is a vast star-forming complex in the constellation Orion and one of the closest to the Solar System, at a distance of about 1300 light-years. This massive stellar nursery reveals itself through the glow of cosmic dust in the interstellar material that pervades it. Heated by radiation from newborn stars, the dust shines brightly at far-infrared wavelengths, revealing a tangled network of filaments.

The bright yellow, white and pink areas in the Herschel image are the densest regions, where many protostars and newborn stars are found. Darker regions correspond to colder portions of the cloud where star formation is not as active. On the right side of the image, the cloud exhibits a very sharp edge where the material in Orion B is being compressed by powerful winds blowing from clusters of massive stars located beyond the field of this image. These mighty stellar winds have sculpted the iconic Horsehead Nebula, glowing brightly on the right-hand edge of the Herschel image.

Herschel's far-infrared view of Orion B also shows other pockets of star-forming gas and dust nestled in the intricate structure of this cloud: NGC 2024, also known as the Flame Nebula, and NGC 2023 on the right side of the image, to the left of the Horsehead Nebula; and NGC 2071 and NGC 2068 on the left side of the image.

Lower right panel: The visible-wavelength image shows a portion of Orion B (as indicated with the white square in the far-infrared image). The bright star is Alnitak (also known as Zeta Orionis), the leftmost star in Orion's Belt. To the right, the Horsehead Nebula stands out as a silhouette against the diffuse glow of the IC 434 nebula. The Horsehead Nebula is a 'dark nebula', consisting of material so dense that it blocks visible light from background stars or surrounding clouds. Inside the dense material, stars are on the verge of being born. The brighter IC 434 is an 'emission nebula', which radiates as its gas is ionised by ultraviolet light from nearby massive stars.

Below the star Alnitak lies the emission nebula NGC 2024, also known as the Flame Nebula. At visible wavelengths the Flame Nebula appears as a bright region crossed by prominent dark lanes, whereas the far-infrared view reveals the opposite structure. Between the Horsehead and Flame Nebulae is the star-forming region of NGC 2023, a 'reflection nebula' that shines brightly at visible wavelengths because light from nearby stars permeates them. The stellar light is not energetic enough to ionise the gas in these clouds – as happens in reflection nebulae – but scatters off the cloud material causing it to glow.

Lower left panel: The near-infrared image of the Horsehead Nebula from the NASA/ESA Hubble Space Telescope reveals the inner structure of this pillar of gas and dust whose shape is being sculpted by mighty stellar winds. At these wavelengths, light is no longer absorbed by the nebula material, so the distribution of gas that will develop into stars is exposed, along with the gleam from stars located either within the nebula or in the background. The bright source at the top left edge of the nebula is a young star that has taken shape from the cloud and whose radiation is already eroding the surrounding interstellar material.

Herschel's view of the Orion B molecular cloud

A Horsehead, a Flame and hidden gems in Orion B