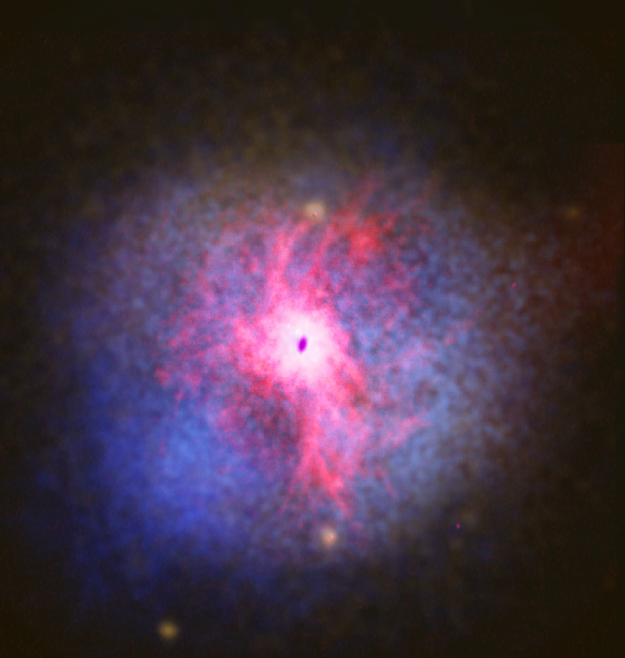 This image shows a composite view of the giant elliptical galaxy NGC 5044.

The stellar component, as observed at optical wavelengths, is shown in white at the centre of the image. The other stars scattered around the image are foreground stars from our own Galaxy.

The galaxy is embedded in a hot atmosphere of ionised hydrogen gas, which is shown in blue. With temperatures up to tens of millions of K, the hot gas shines brightly in X-rays and was observed using NASA's Chandra X-ray Observatory.

Observations show that some of the hot gas cools down and flows towards the centre of the galaxy. There, the cold gas may condense and form stars, unless it is reheated or expelled from the galaxy by other agents.

The filamentary network shown in red is warm hydrogen gas, as observed in the H-alpha emission line at a rest wavelength of 656.28 nm with the Southern Observatory for Astrophysical Research (SOAR) telescope in Chile.

When observed in radio wavelengths, this galaxy appears only as the weak source shown in violet at the centre of the image, which belies the moderately active black hole sitting at the centre of the galaxy. The radio observations were performed with NRAO's Very Large Array (VLA).

A team of astronomers has observed NGC 5044 and other nearby giant elliptical galaxies using ESA's Herschel Space Observatory, to try to figure out why galaxies of this type do not form stars. Spectroscopic observations obtained with Herschel showed that, contrary to previous belief, NGC 5044 contains plenty of cold gas – the raw material to form stars. The same holds true for most of the giant elliptical galaxies that the team observed.

A multi-wavelength study suggests that, while hot gas cools down in these galaxies, stars do not form because of feedback from the central supermassive black hole, which stirs up the gas preventing it from turning into stars.