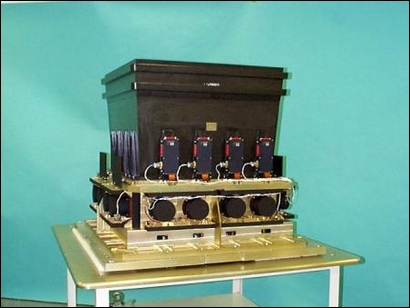 The imager, IBIS (Imager on Board the Integral Satellite) gives sharper images than any previous spaceborne gamma-ray instrument. IBIS can locate sources to within a precision of 30 arcseconds, which is the equivalent of measuring the position of individual people in a crowd situated at a distance of 1.3 kilometres. The instrument works in the energy range 15 keV to 10 MeV. It consists of a detector and a coded mask made of tungsten that is placed 3.2 metres above it. The detector (seen in this image) uses two layers of sensitive picture elements (pixels) located one on top of the other. The top layer is made of 16 384 cadmium-telluride (Cd-Te) pixels and detects the low-energy gamma rays. The second layer consists of 4096 caesium-iodide (Csl) pixels, and captures the high-energy gamma rays. Comparing the results from the two layers allows the paths of the gamma rays to be tracked in 3D. The principal investigating institutions for IBIS are IAS Roma, Italy, CEA Saclay, France and TESRE Bologna, Italy.
20-Jan-2021 20:47 UT