Integral's view of a gamma-ray burst

Integral's view of a gamma-ray burst 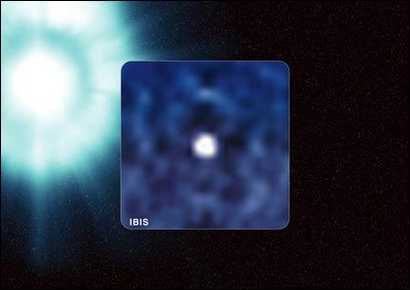 On 25 November 2002, a powerful explosion, known as a gamma-ray burst (GRB), appeared in front of Integral. For about 20 seconds, a shower of gamma rays bathed the spacecraft and was captured by the gamma-ray imager (IBIS) and the spectrometer (SPI) on-board Integral. This is the first time ever that a gamma-ray burst has been captured using such a powerful gamma-ray camera. Scientists expect about one GRB every month to appear in the direction that the spacecraft happens to be looking. Most GRBs are believed to be the death of an extremely massive star in the distant Universe. According to a second theory, however, GRBs may come from the collision of two neutron stars, which are extremely dense objects. This particular GRB, designated GRB021125, is thought to have been located about 5 thousand million light years away. When they occur, GRBs shine as brightly as hundreds of galaxies each containing millions upon millions of stars.
View »
1-Dec-2022 19:24 UT