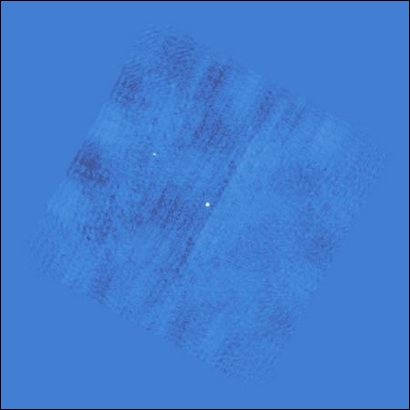 The Imager on Board the Integral Satellite (IBIS) was first activated and put through its paces in November 2002. It captured this image during that test phase and shows not only Cygnus X-1 (centre) but also Cygnus X-3 (upper left). High-energy sources are shown with an 'X' followed by a number according to their strength. Cygnus X-3 is the third brightest high-energy emitter in the constellation of Cygnus, the Swan. Instead of a black hole, Cygnus X-3 is thought to be a neutron star (a tiny dead stellar core) pulling its companion star to pieces. Taken on 16 November 2002, the new IBIS observations support this theory. Cygnus X-1 is about 10 000 light years from Earth and one of the brightest high-energy emitters in the sky. It was discovered in 1966 and is thought to be a black hole, ripping its companion star to pieces. The companion star, HDE 226868, is a blue supergiant with a surface temperature of around 31 000K. It orbits the black hole once every 5.6 days. For more images and information (in French), click here.
View »
1-Dec-2022 21:19 UT