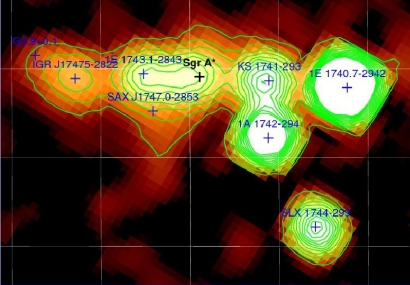 The picture shows the Galactic Centre as observed with IBIS/ISGRI onboard INTEGRAL. The grid lines indicate galactic coordinates with a spacing of 0.5 degrees.

For this image a total of 7 × 106 second observation time was used, giving an effective exposure time at the position of Sgr A* of 4.7 × 106 seconds. The angular scale of this picture is about 2.5° x 1.5°.  The colours represent significances ranging from 3 sigma (black) to greater than 60 sigma (white). The contours mark significance levels from 9.5 to 75 linearly.

Results of this observation, which also include spectra extracted for the central source for both JEM-X and IBIS/ISGRI are described in a paper by Bélanger et al. (see also A Persistent High-Energy Flux from the Heart of the Milky Way).  The main result is that the central source near Sgr A* is not a point source, but likely a diffuse, but compact, source. It also shows that the source is faint, but persistent with no variability above 3 sigma.