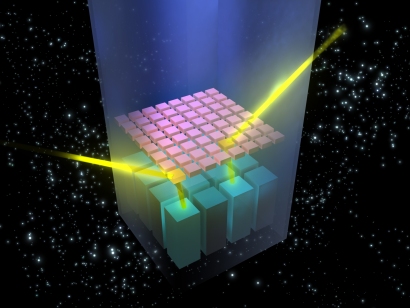 This artist's impression provides a schematic view of how IBIS (Imager on-Board INTEGRAL Satellite) can reconstruct images of powerful events like gamma-ray bursts (GRBs) using the radiation that passes through the side of INTEGRAL's imaging telescope. IBIS uses two detector layers, one on top of the other, while most gamma-ray telescopes contain just a single detector layer. In IBIS, the higher energy gamma rays can Compton scatter of the first detector layer (called ISGRI), losing some energy in the process, but not being completely absorbed. The deflected and now less energetic gamma rays then pass through to the layer below (called PICsIT) where they can be captured and absorbed by the PICsIT crystals. The blue-shaded part of the image describes the fully coded field of view of the instrument. IBIS can see around corners because gamma rays from the most powerful GRBs would pass through the lead shielding on the side of the telescope, then through the first detector layer before coming to rest in the second layer. The scatter locations in the two detecor layers and the energy deposits can then be used to determine the direction of the GRB.
View »
7-Feb-2023 02:16 UT