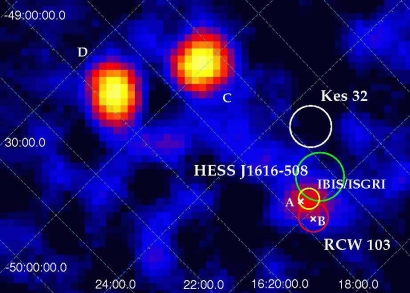 IBIS/ISGRI image of the region surrounding HESS J1616-508 in the energy band 18-60 keV. The green circle represents the size of the object's TeV emission from the HESS survey. The pulsar PSR J1617-5055 is labelled as A and is located within the IBIS/ISGRI positional error box (yellow circle) of the nearby detected soft gamma ray source.

The two supernova remnants RCW 103 and Kes 32 are also indicated with the red and white circles respectively. At the centre of RCW 103 is the compact and highly variable X-ray source 1E 161347-5055.1, labelled as B.