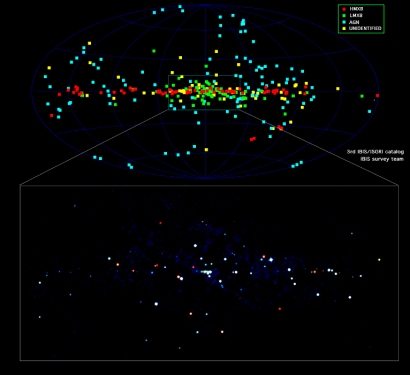 Upper image
The distribution on the sky of four of the main soft gamma-ray source populations observed in the third INTEGRAL/IBIS survey catalogue. This newly-released catalogue contains 421 sources. Of the known systems, the low-mass X-ray binaries (LMXB) are old systems mainly populating the galactic bulge, the high-mass X-ray binaries (HMXB) are younger systems seen along the galactic plane, and the active galactic nuclei (AGN) are extragalactic sources seen over the whole sky. Around one in four of the sources seen by INTEGRAL are unidentified, and their distribution is also shown.

Lower image
False colour image of the central region of our galaxy. This is a composite image based on all-sky IBIS/ISGRI maps in three energy windows between 17 and 100 keV and represents the true 'X-ray colours' of the sources. Red sources are dominated by emission below 30 keV, while blue sources have harder spectra, emitting strongly above 40 keV.