Hard X-ray emission from the extended shell of the supernova remnant RXJ1713.7-3946

Hard X-ray emission from the extended shell of the supernova remnant RXJ1713.7-3946 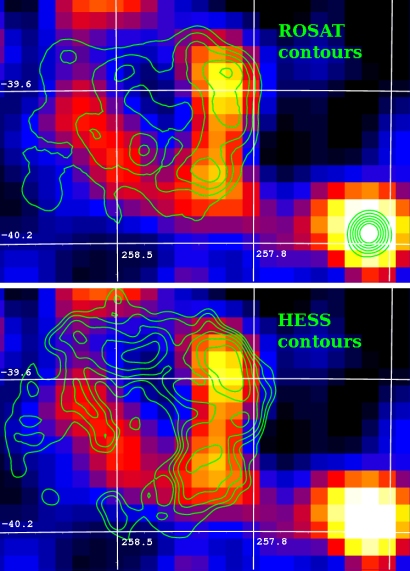 The INTEGRAL observatory has -for the first time- resolved the spatial structure of this supernova in hard X-rays (see related publication by Krivonos et al. 2007, A&A, 475, 775). Both figures show the colour-coded image of RXJ1713.7-3946 in the 17-60 keV energy band obtained with IBIS/ISGRI onboard INTEGRAL. The supernova remnant RXJ1713.7-3946 has a clear ring-like structure with ~24 arcmin radius.

Superposed in green are the surface brightness contours in the soft (0.1-2.4 keV) X-ray band mapped with ROSAT (top panel) and in TeV gamma-rays obtained with the H.E.S.S. telescope (bottom panel).

The similarity of the images in soft X-rays, hard X-rays and in TeV (high energies) is striking, especially considering the nine orders of magnitude covered in photon energies. The shape of the broad band spectrum of RXJ1713.7-3946 measured by INTEGRAL and other observatories will help to understand the details of cosmic rays acceleration and the radiation mechanisms at work in the expanding shell of the remnant.

The bright spot at the bottom-right of both images is a chance projection of an unrelated object, known as ROSAT source J170849.0-400091. It is an anomalous X-ray pulsar, which is brighter than the supernova remnant in the ROSAT and INTEGRAL energy bands, but is not visible in the HESS image in TeVs.