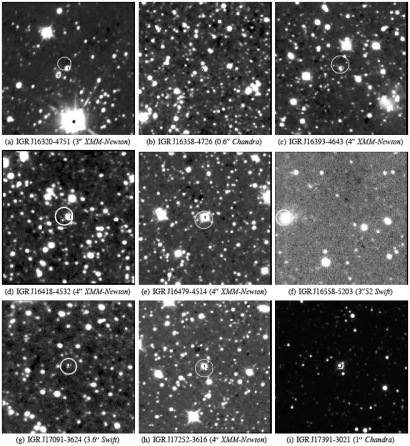 INTEGRAL has revealed a newly-discovered population of highly obscured X-ray binary systems. To better understand this emerging population, Sylvain Chaty and collaborators have selected a sample of INTEGRAL (IGR) sources for which an accurate localisation was available. This image shows nine of the thirteen sources studied by Sylvain Chaty et al. The aim of the study was to identify the stellar counterpart and to reveal the nature of the companion star and of the binary system (see related publications).

The above image is Figure 2 from Chaty, S. et al. [2008], showing finding charts of nine of the thirteen INTEGRAL sources, observed at the ESO NTT telescope in the infrared KS band (2.2 μm). Fields of view: 1'x1'. North is to the top and East to the left. Overplotted are the most accurate localisations available to date.

In addition to the ESO NTT optical and NIR observations, the authors used the following data to build SEDs of the selected binary systems:

From the SEDs the study allowed to identify the stellar counterpart of the X-ray sources and to reveal the nature of the companion star in each binary system. These multi-wavelength observations have shown that many of these sources are high-mass X-ray binaries hosting neutron stars orbiting around luminous and evolved supergiant companion stars.