Optical light curve of HZ Her / Her X-1

Optical light curve of HZ Her / Her X-1 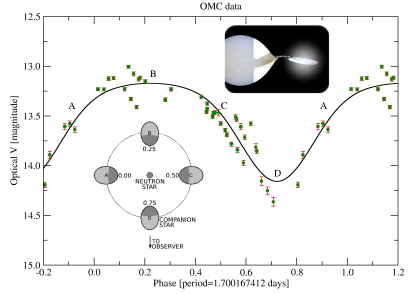 HZ Her / Her X-1 is a well known X-ray binary system, consisting of a neutron star which is an accreting X-ray pulsar and a companion star of 2.3 solar masses circling each other every 1.7 days on an almost circular orbit.

The optical light curve depicted here has been obtained from data taken by INTEGRAL's Optical Monitoring Camera (OMC) during twelve days of observations - covering about seven orbital periods of the binary system - in July and August 2005.

The insets show an artist's impression of the binary system (top right) and a sketch of the situation at different orbital phases (bottom left) - not to scale and omitting the accretion disk. The phases are also indicated along the light curve:

Public data for Her X-1 and many other variable systems can be accessed via the OMC Archive at the Laboratorio de Astrofísica Espacial y física Fundamental (LAEFF). See the related links on the right-hand side of the page.

INTEGRAL watches as Her X-1 spins up