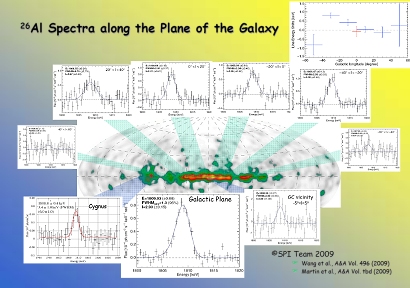 Gamma-rays from 26Al radioactivity have become a tracer of massive stars in our Galaxy, as these shed nucleosynthesis products through Wolf-Rayet winds and supernovae. With a radioactive-decay time scale of 1 Myr, ejecta from many stars and supernovae are generally superimposed. Thus, 26Al gamma-rays reflect current nucleosynthesis from massive stars in our Galaxy, and are seen from regions distributed along the plane of the Galaxy and its spiral arms.

Early INTEGRAL/SPI high-resolution spectroscopy had exploited the global signal from the inner-Galaxy's bright ridge. The 26Al gamma-ray line (E=1809 keV) had been found to be rather narrow and in agreement with a standard moderately-turbulent ISM around typical massive-star groups. Also, encouraged by 26Al line gamma-ray energy shifts from the inner Galaxy, which were recognized and compatible with large-scale Galactic rotation, the 26Al flux was interpreted as a global Galactic quantity. Using model yields and the standard IMF, it is converted into a measurement of the current core-collapse supernova rate in our Galaxy of 1.9±1.1 supernovae per century.

Now the exposure along the Galactic plane becomes sufficient for spatially-resolved spectroscopy in the 26Al line, the signal exceeds 5σ significance in 20-degree wide bins along the bright parts of the Galactic plane. The flux in the bright inner-Galaxy ridge is determined as 2.9±0.2 × 10-4 ph cm-2 s-1 rad-1, and a small (~1.3±0.2) asymmetry favouring the fourth quadrant is indicated. The systematic shifts of line centroids from large-scale Galactic rotation are now clearly established, their detailed comparisons with expected Doppler shifts from (uncertain and model-dependent) large-scale motions in the inner Galaxy with its bar are under investigation. The line appears to be narrow with ISM velocities within the 100-kms-1 range in all samples, except for a hint of increased velocity spread towards the Aquila region. The latitudinal scale height of 26Al gamma-rays is ~130 pc and significantly exceeds the thickness of the Galactic disk in molecular gas. For the Cygnus region, a sufficiently-accurate stellar census has been derived in recent years. Employing the spatial resolution of the SPI gamma-ray telescope, the 26Al flux attributed to Cygnus complex of massive stars is discriminated against the large-scale Galactic-disk emission as 3.9±1.1 × 10-5 ph cm-2 s-1, with the Cygnus OB2 association as dominating source. This allows for a more detailed consistency check of observed flux against nucleosynthesis models for massive stars and their supernovae.

A hi-res PDF version of this image is available here