One in four AGN is Compton thick in the local Universe

One in four AGN is Compton thick in the local Universe 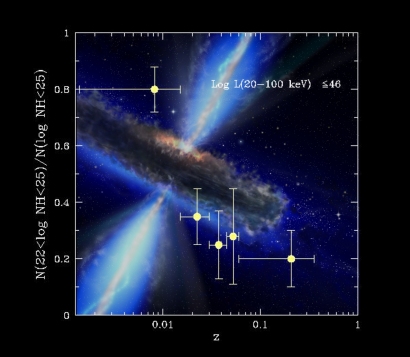 Compton thick Active Galactic Nuclei (AGN), in which the nucleus is obscured by large amounts of gas and dust, are thought to be important contributors to the cosmic background radiation.

Different fractions of Compton thick AGN have been found when studying optically selected AGNs than in high-energy selected samples. Now, by studying the NH distribution in a complete sample of 88 AGN selected in the 20-40 keV band from INTEGRAL/IBIS observations, this apparent disagreement has been solved. It can be explained as selection bias caused by the reduction in the high energy flux from Compton thick objects.

The figure shows that the measured fraction of absorbed sources in the new sample decreases from 80% to about 20-30% as a function of redshift and all the Compton thick AGN are found at z ≤ 0.015. The conclusion is that only in the low redshift bin the entire AGN population is seen, while the Compton thick objects are lost at higher redshifts due to their lower intensity.

Taking this low z bin as the only one able to provide the 'true' distribution of absorption in type 1 and 2 AGN, the fraction of Compton thick objects can be estimated to be ≥ 24%, i.e. 1 out of 4 AGNs in the Local Universe is Compton Thick.