The new sources of the 4th INTEGRAL/IBIS catalogue

The new sources of the 4th INTEGRAL/IBIS catalogue 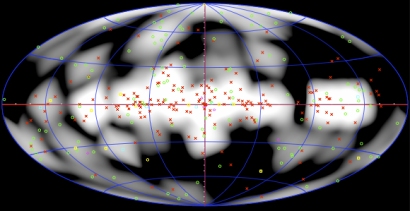 The fourth IBIS/INTEGRAL catalogue contains 331 new sources when compared to the third catalogue. This image shows the sky distribution of the new sources superimposed on the delta exposure - the increase in exposure since the third catalogue. Of these new sources, around 120 are associated with extragalactic sources (green circles), while only about 25 are associated with known Galactic sources, and the remainder are so far unidentified (red crosses).

The new sources can be seen to be closely following the exposure, and still comprise a very significant Galactic component. The fact that most of these are unidentified suggests that the INTEGRAL observations along the Galactic plane have reached a level of depth where previous X-ray observations are no longer always able to provide associations for the new sources.

When combined with the variability of the Galactic sources, this indicates that further observations of the Galaxy will continue to uncover new sources, and prompt follow-up of these new sources is of critical importance to understand their true nature.

However, it's not quite that simple - many of the new sources found in or near the Galactic plane by INTEGRAL have been identified as extragalactic sources, and INTEGRAL has proved particularly adept at uncovering this obscured population.