ESA Science & Technology - What are the Fermi/LAT sources?

What are the Fermi/LAT sources?

What are the Fermi/LAT sources? 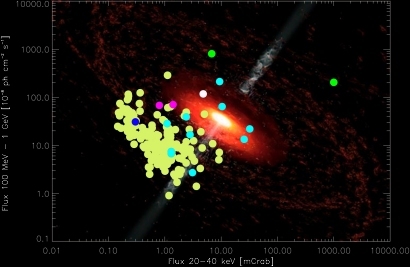 In the last couple of years, INTEGRAL/IBIS has been joined in operation by the Fermi gamma-ray satellite, providing a coverage of the sky over 10 orders of magnitude in energy, from keV to GeV. Many of the detected Fermi sources are expected to emit around 20 keV, i.e. in the IBIS regime.

With the aim of investigating such a link, the positions of the 205 Fermi/LAT bright sources have been cross-correlated with the fourth INTEGRAL/IBIS catalogue. The main result is that only a minuscule part (14) of the more than 720 sources detected by INTEGRAL and the population of 205 Fermi/LAT sources are detected in both spectral regimes. Their great majority are optically identified Blazars (10) complemented by two isolated pulsars (Crab and Vela) and two high-mass X-ray binaries (HMXBs: LS I +61 303 and LS 5039).

Two more possible associations have been found: one is related to the massive colliding wind binary system Eta Carinae, discovered to be a soft gamma-ray emitter by recent INTEGRAL observations, and the other one is related to the still unidentified INTEGRAL source IGR J17459-2902 in the Galactic Centre region. For the remaining 189 Fermi/LAT sources no INTEGRAL counterpart was found, providing a 2 sigma upper limit.

The figure above shows the gamma-ray flux (100 MeV-1 GeV) of each Fermi source as a function of the corresponding 20-40 keV IBIS flux. Light blue points are blazars, green are pulsars, magenta are HMXBs, dark blue is Eta Carinae, white is IGR J17459-2902 and finally yellow points refer to sources emitting at high energy and not in the IBIS range (2 sigma upper limits).

We note that no LAT sources (except for the peculiar object ETA Carinae) have been detected by IBIS at a flux below 1 mCrab despite the fact that a large fraction of the IBIS sky has a detection limit well below this value (typically about 0.1 mCrab) and is well populated with hard X-ray sources. This indicates that the typical LAT source is either very strong or very weak in the IBIS energy range providing important information on the spectral energy distribution of these objects.