High-energy transients in the Magellanic Bridge

High-energy transients in the Magellanic Bridge 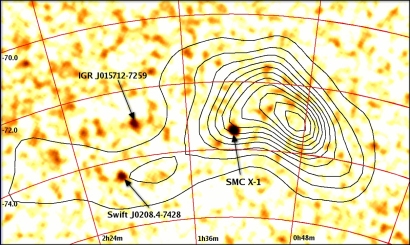 The Bridge is a stream of neutral hydrogen linking the Small and Large Magellanic Clouds, and is thought to have been extracted from the Clouds during gravitational interactions between these two galaxies.

This image from McBride et al. (2010) shows a 15-35 keV IBIS map of the SMC and Magellanic Bridge, and the detection of two of the new transient sources (along with SMC X-1, a persistently accreting massive X-ray binary in the SMC). The contours show the underlying structure of neutral hydrogen in this region.

This work presents the first near-uniform survey of the Magellanic Bridge at X-ray wavelengths and shows an emerging population of X-ray binaries, probably formed in-situ, in the Magellanic Bridge. Given the typical X-ray duty cycles of such transients, and the young stellar population of this region, we may, in fact, be observing just the tip of the iceberg of the high-energy population. Understanding the stellar population in this acutely turbulent environment in our Local Group is pivotal to interpreting observations of galaxy mergers in much more distant environments.