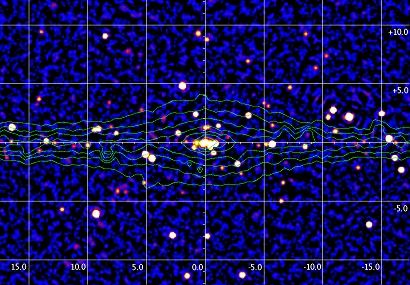 This image shows a map of the Galactic Bulge region, reconstructed from data collected over seven years, from 2003 to 2010, with IBIS/ISGRI on board INTEGRAL, and covering the 17-60 keV energy band. The overlaid green contours are isophotes of the 4.9 micron surface brightness of the Galaxy as seen by COBE/DIRBE, revealing the bulge/disc structure of the inner Galaxy. The near-infrared brightness of the Galaxy traces also the hard X-ray Galactic Ridge emission.

See "related images" in the right-hand menu for a version of this image without the overlaid contours.