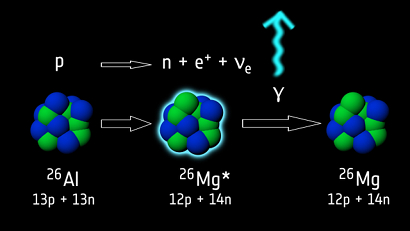 One of the isotopes of aluminium, namely aluminium-26 (26Al), contains 13 protons and 13 neutrons in its nucleus. Unlike the stable isotope aluminium-27 (27Al), which comprises an extra neutron, 26Al is radioactive and decays with an exponential lifetime of about one million years. During this process, one of the protons in the nucleus decays into a neutron, releasing, as a by-product, a positron and a neutrino, and turning the aluminium nucleus into an excited nucleus of the element magnesium (26Mg*); upon its transition into its stable ground state (26Mg), the excited nucleus emits an extremely energetic photon, which is observable in gamma rays at an energy of about 1.8 MeV.
21-Jan-2021 03:14 UT