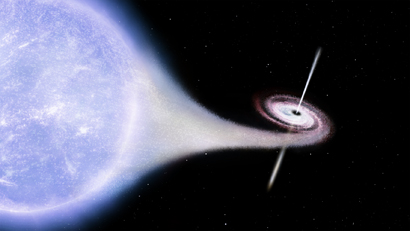 This illustration depicts the X-ray binary Cygnus X-1, composed of a 35 Msun blue O9 supergiant star and a black hole with a mass of about 10 Msun.

With its intense gravitational field, the black hole draws matter from its companion, and the stripped material spirals around the black hole, forming an accretion disc. Friction in the disc heats the material up to millions of degrees, making it shine in X-rays. Furthermore, the rotation of the disc funnels part of the accreted material into highly collimated, bipolar jets of particles that are released at relativistic speeds.

Based on the existing link between accretion and ejection of matter in X-ray binaries, astronomers also refer to these objects as 'microquasars' because they appear as miniature versions of quasars - the nuclei of active galaxies.

INTEGRAL celebrates a decade of discoveries