The energy spectrum of Cygnus X-1 and its polarized signal

The energy spectrum of Cygnus X-1 and its polarized signal 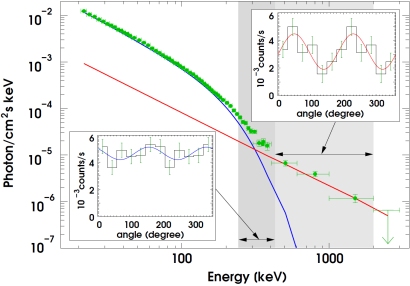 This graph shows the spectrum of Cygnus X-1 as observed by the IBIS telescope on board the INTEGRAL satellite (green points with error bars).

The spectrum clearly shows two distinct regimes at energies below and above 400 keV, as shown by the two different fits to the data points: the blue curve describes the spectrum between 20 and 400 keV, which is produced by Compton scattering of photons emitted in the accretion disc off high-energy electrons located in a corona close to the black hole; the red line describes the data between 400 keV and 2000 keV, highlighting that emission at these higher energies is produced by a different physical mechanism.

The two insets show measurements of the polarization signal between 250 and 400 keV (bottom left) and between 400 keV and 2000 keV (top right). Polarimetry measurements can be performed with INTEGRAL thanks to its configuration with two separated detector planes: incoming photons are initially scattered, in the first plane, and then absorbed in the second one.

The degree of polarization of incoming radiation is estimated by analysing the pattern described by the photons detected in the second plane, and a measure of it is shown in the insets. In the 250-400 keV band, the measured signal is consistent with a flat signal, indicating that the emission is only weakly polarized or not polarized at all; in the 400 keV-2000 keV band the signal shows a significant modulation, consistent with a high degree of polarization.

The detection of polarization above 400 keV indicates that emission at these energies derives from non-thermal radiation processes that take place in the jets, such as synchrotron or inverse Compton emission.