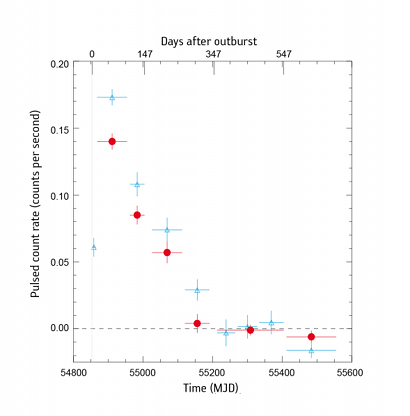 Astronomers studying the magnetar 1E 1547.0-5408 have discovered unusual behaviour that may be key to understanding how magnetars produce energetic non-thermal radiation. During a period of extreme bursting activity in January 2009, both pulsed and unpulsed X-rays were detected after a timing glitch. Unlike the unpulsed high-energy X-rays, the pulsed emission wasn't released immediately; it was only evident 11 days after the glitch occurred, fading away to undetectable levels after about 350 days. This behaviour is consistent with one particular model (Beloborodov, 2009) describing magnetars. This figure shows the measured pulsed count rate for X-rays (~ 11.2-33.8 keV depicted with blue triangles, ~ 4.1-11.2 keV depicted with red circles) since the outburst of January 22, 2009. Time is plotted as Modified Julian Date (MJD). MJD is a time convention commonly used in astronomy. It is measured in days from as 00:00 UTC on 17 November 1858. For further details, please refer to Kuiper et al., 2012.
View »
7-Feb-2023 01:50 UT