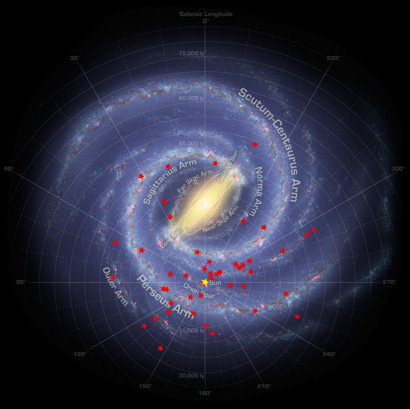 The distribution of high-mass X-ray binary systems (red stars), determined with ESA's INTEGRAL space observatory, is shown superimposed on an artist's impression of the Milky Way. The yellow star represents the position of the Sun.

By studying the distribution of high-mass X-ray binary systems, using data from ESA's INTEGRAL space observatory, scientists have shown a strong correlation between the position of the X-ray emitting stars and complexes of star formation in the Galaxy, the latter usually being located in the Galaxy's spiral arms.

HMXBs are short-lived, surviving for only a few tens of millions of years, and are therefore not expected to have migrated far from their birthplaces. The separation between the systems and their birthplaces is largely due to the momentum supplied when the more massive star in the binary exploded as a supernova. By comparing the positions of current star forming regions in the Galaxy's spiral arms and a sample of 13 of the high-mass X-ray binary stars, the scientists could estimate where the binary systems were born and hence constrain the ages and migration distances of the systems as a result of the velocity boost from the supernovas.  Identifying the birthplaces of these stars is key to assessing the influence of the environment on the formation and subsequent evolution of these systems.