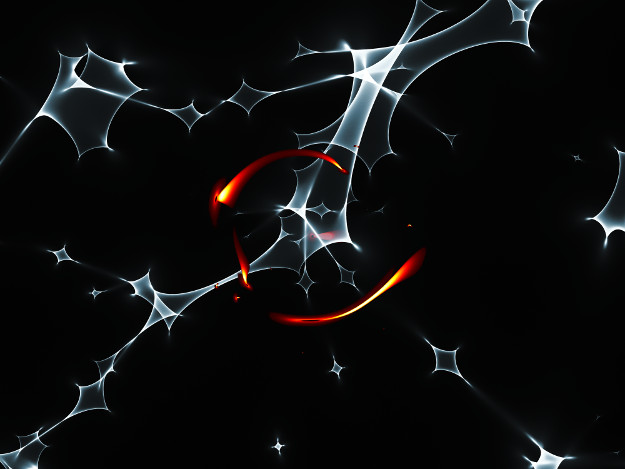 Simulated view of the supermassive black hole at the centre of a distant galaxy, magnified by the gravitational effect of stars located in a foreground galaxy.

Massive cosmic objects, from single stars to galaxy clusters, bend and focus the light that flows around them with their gravity, acting like giant magnifying glasses. This effect is called gravitational lensing or, when it is detected on tiny patches on the sky, microlensing.

The magnification depends on the mass and shape of the intervening object acting as a gravitational lens, as well as on the relative distances between the source of light, the lens and the observer. The combination of these effects creates a network of preferred positions such that a source of light located there is subject to very strong magnification. In addition, the image of the source might be distorted or appear multiple times.

The network of white lines represents the positions where magnification and distortion effects due to the gravitational lensing of stars in the foreground galaxy is particularly strong. As a result, the black hole and its jets would be imaged multiple times, appearing as the yellow and red arcs indicated in the image.

While this phenomenon happens on patches of the sky so small that our telescopes will never be powerful enough to reveal it, astronomers can still detect this microlensing effect by monitoring variations of the light emitted by the source.

Observing the jets from the black hole in the galaxy known as PKS 1830-211 with ESA's Integral and NASA's Fermi and Swift satellites, a team of astronomers used this effect to measure the size of the region around the black hole where they originate. This is the first time that gravitational microlensing has ever been used with gamma rays to dissect the high-energy processes taking place around a supermassive black hole.

Astronomers use cosmic gravity to create a 'black-hole-scope'