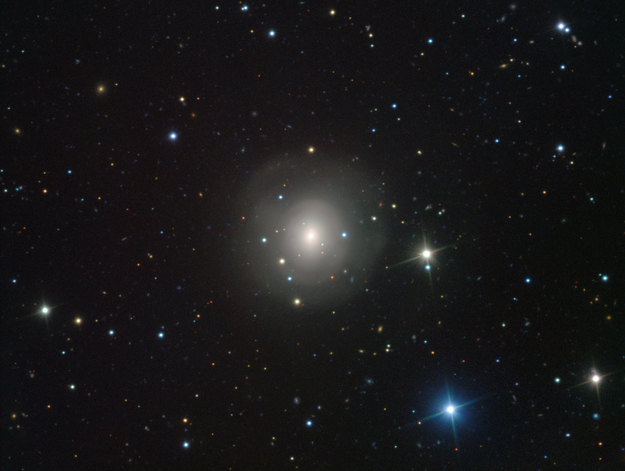 The elliptical galaxy NGC 4993, about 130 million light-years from Earth, viewed with the VIMOS instrument on the European Southern Observatory's Very Large Telescope in Chile.

After the almost simultaneous detection of gravitational waves by the LIGO/Virgo collaboration and of a gamma-ray burst by ESA's INTEGRAL and NASA's Fermi satellites, a large number of ground and space telescopes started searching for the source in the sky.

About half a day later, scientists at various optical observatories spotted something new near the core of galaxy NGC 4993: this was the visible light counterpart to the gravitational waves and the gamma-ray burst, confirming that they originated from the collision of two neutron stars.

The result of such a cosmic clash is a kilonova: the neutron-rich material released in the merger is impacting its surroundings, forging a wealth of heavy elements in the process. The kilonova can be seen just above and slightly to the left of the centre of the galaxy.