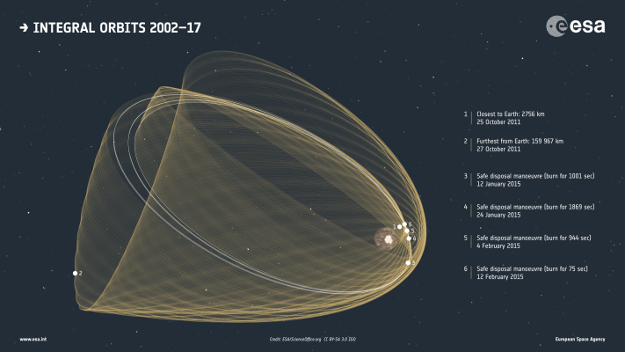 This image depicts the evolution of the orbit of ESA’s INTEGRAL spacecraft from launch on 17 October 2002 up to October 2017.

INTEGRAL observes the ever-changing, powerful, and violent cosmos.  It is the first space observatory that can simultaneously observe objects in gamma rays, X-rays, and visible light.

The spacecraft travels in a geosynchronous highly eccentric orbit with high perigee in order to provide long periods of uninterrupted observation with nearly constant background and away from the radiation belts. Over time, the perigee and apogee have changed, as has the plane of the orbit.

In 2015, spacecraft operators conducted four thruster burns that were carefully designed to ensure that the satellite's eventual entry into the atmosphere in 2029 will meet the Agency's guidelines for minimising space debris. The orbital changes introduced during these manoeuvres are highlighted in white.

Making these disposal manoeuvres so early also minimises fuel usage, allowing ESA to exploit the satellite's lifetime to the fullest.

By revealing both the diffuse emission from our Galaxy, the Milky Way, and the population of individual sources that shine brightly at these energies in our Galaxy and beyond, INTEGRAL has broadened our understanding of the high-energy Universe.