The water on Earth comes from space

The European Space Agency's Infrared Space Observatory, ISO, has been a pioneer in the challenge of unveiling the infrared face of the Universe, which remains completely hidden, invisible, to optical telescopes and to the human eye - they can detect only the so-called 'visible' light. The study of the infrared sky from space began in 1983 with ISO's predecessor, the US-Dutch-UK IRAS satellite; ISO continued the exploration with more sensitivity, wider wavelength coverage and a longer operational lifetime, as well as being operated as a true space observatory. ISO operated from November 1995 until May 1998.

The Infrared Universe looks quite different to the visible one: in the infrared sky, objects that are too cold to radiate in the visible become very bright, as do those surrounded by dust (for optical telescopes the dust forms an opaque barrier). ISO, therefore, allowed astronomers to witness for the first time processes such as the birth of a star - which takes place in dusty and cold 'cocoons' - or the metamorphosis of an old, dying star into a beautiful nebula.

ISO also proved to be a wonderful tool to unlock the chemistry of the Universe. Most atoms and molecules in space emit large amounts of energy either at radio or infrared (including very far infrared wavelengths). Until ISO most chemical compounds in space had been detected using radio and submillimetric telescopes; with ISO the list has grown with more than twenty new molecules, most of them in the solid state. Some of these newly detected compounds are complex carbonaceous molecules - an indication of the rich organic chemistry that takes place in the space between the stars.

ISO made nearly 30 000 scientific observations. Some of ISO's most celebrated findings are the following:

The water on Earth comes from space

Most water on Earth was not produced here - it came from space. This is old news for astronomers, but until now water-producing factories had not been observed at work in space. Nor was it possible to trace water at the different stages of its long journey through space. Very little information about cosmic water can be obtained from the ground - primarily because the Earth's atmosphere is itself rich in water vapour and blocks our view of the water in the Universe beyond. ISO helped astronomers to reconstruct for the first time the cosmic cycle of water. 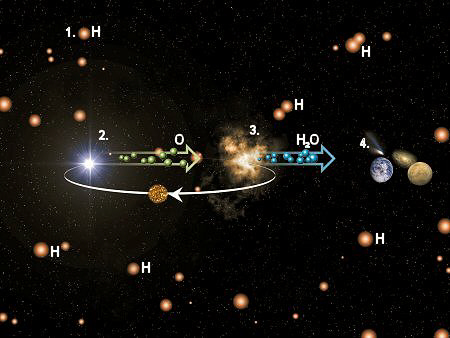 Hydrogen (1.) was originally produced in the Big Bang and is found everywhere in the Universe. Oxygen (2.) is made in stars and dispersed out into the Universe in events such as supernova explosions. The two elements mix in star-forming clouds (3.) and form large amounts of water (H2O). The molecules of water leave the clouds and end up in many different places (4.) - comets, planets the centres of galaxies ... When the newly-born stars become old more oxygen is made available to the cosmic water factory.

First, the ingredients: Hydrogen is the most abundant element in the Universe, and oxygen is produced at the centres of massive stars and dispersed into space by stellar winds or supernova explosions. The ideal conditions for these gases to combine are found in places such as star-forming regions, for example, the Orion Nebula. In 1997 ISO detected large quantities of water in Orion - the most studied star-forming region - and astronomers estimated that the water-production rate in the nebula could fill Earth's oceans 60 times a day. (See also ISO finds steamy cloud in interstellar space)

Some of these newly formed water molecules start to travel out into the cold of interstellar space, where they form ice grains. With time they will end up in comets or in planets like our own. ISO has also detected water in many other regions, including the galactic centre and in both newborn and dying stars.

A rich organic astro-chemistry takes place between the stars

Atoms and molecules in space are identified by comparing their spectra - a signal that is unique to each compound and hence can be used as a 'signature' - with that of known compounds obtained in the laboratory. But sometimes no match is found, and then astronomers cannot identify what molecule they have detected. That is the case with one of the most ubiquitous molecules detected so far, a group of compounds that have left their chemical fingerprint in many places in the Universe. They are known to be complex carbonaceous molecules, made of more than a hundred carbon atoms; their abundance shows that a very rich and active organic chemistry is taking place around the stars and in the space between them.

ISO confirmed the presence of these compounds in many different environments, and gave some clues about their nature. Some ISO data, for instance the very recent identification of benzene in space (See also ISO detects benzene in space) suggest that these molecules have an 'aromatic' structure, that is, they are ring-shaped molecules. That is in fact the most accepted view among astronomers, most of which already call these carbonaceous compounds 'Polycyclic Aromatic Hydrocarbons', or 'PAHs'.

The ring-shaped structure is relevant, since life as we know it is based - among other things - on the ability of the carbon atom to form ringed molecules.

Links between the rich organic astro-chemistry and the one developed in newborn planetary systems - including our own Solar System - are actively being searched for in comets and meteorites.

Dust is the most abundant raw material in the Universe. Planets, comets... they are all made from reprocessed dust: particles often much smaller than one thousandth of a millimetre and of varied chemical composition. As in the case of water, there is a 'dust-cycle' taking place in the Universe. Stars expel dust when they are old, the dust forms dense clouds in interstellar space, and new stars - and often planetary systems - are formed from the dust in that cloud. When the new stars become old and expel dust themselves the cycle closes (although the dust will be more processed and therefore with a slightly different chemistry). Thanks to ISO, astronomers can now 'trace' some of this dust through different stages of its cycle.

ISO discovered in 1998 that crystallised silicates - such as the green crystal olivine - are a main component of dust. (See also The crystalline revolution: ISO's finding opens a new research field, 'astro-mineralogy' .) This triggered a `crystalline revolution' in the astronomical world, because it meant that silicates, which are a large family of compounds, could be specifically identified. Silicates are the most abundant minerals on Earth and were also known to be very common in space, but it had been assumed that cosmic dust silicates had, in general, an amorphous structure. The fact that their structure is crystalline and not amorphous allows astronomers to identify each crystal, track its presence in different regions and follow its journey through space.

So far crystalline silicates have been found in the circumstellar discs around evolved stars where they are synthesised; in comets, such as comet Hale-Bopp and in protoplanetary discs, where they act as building blocks for new planets. Experts in space chemistry still do not understand how crystalline silicates are formed, but they can already celebrate the birth of a new field of research - 'astro-mineralogy'.

Other ISO discoveries on astro-chemistry:

Other results on organic molecules

ISO finds the precursors of the complex organic molecules in space

On discovery of methyl radical CH3

On diamonds in space

On benzene in Saturn and water in the Solar System

On water on Titan