The unification scheme for radio galaxies and quasars

The unification scheme for radio galaxies and quasars 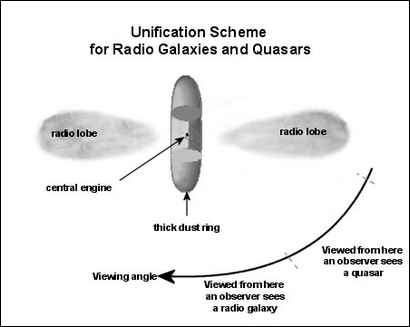 Although they have been traditionally classified as different kinds of objects, scientists now believe that radio galaxies and quasars are the same kind of object, but viewed in different ways. Both forms are powered by a supermassive black hole, or 'central engine' surrounded by a wall of dust.
If an observer views the object from such an angle that they are peering over the dust wall directly into the central powerhouse then they see a quasar.
If, on the other hand, the object is oriented such that the central emission is blocked from the observer by the dust wall, then the object is perceived as a radio galaxy.
View »
3-Feb-2023 06:46 UT