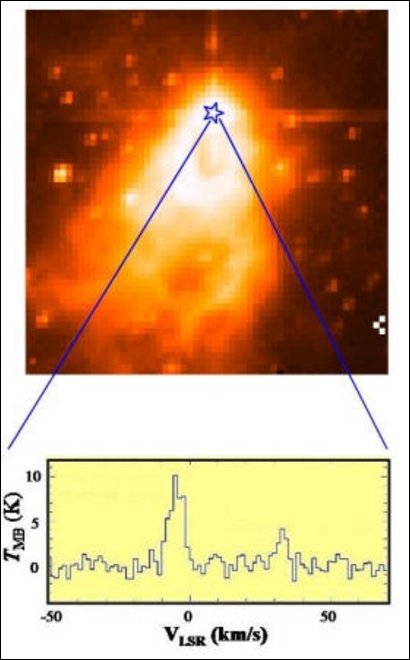 The poisonous compound hydrogen cyanide is common in space. New results obtained by a Dutch-German team reveal that it can be used to study the birth of massive stars. The team used ESA's Infrared Space Observatory, ISO, and the ground-based James Clerk Maxwell Telescope, in Hawaii. The image on top shows the embryo-star GL 2591 as observed with the James Clerk Maxwell Telescope (from Hodapp 1994, ApJS, 94, 615).
Underneath is the spectrum of the massive protostar. The spectrum of an object tells how the object absorbs or emits light depending on its chemical composition, thus the spectrum is a type of 'chemical fingerprint'. In this case, the fingerprint points to hydrogen cyanide in the spectrum of the protostar. This spectrum was obtained with the MPIfR/SRON heterodyne spectrometer on the James Clerk Maxwell Telescope. This spectrometer has a very high spectral resolving power and a state-of-the-art sensitivity. It is a 'test-bed' for HIFI, one of the instruments on board ESA's Herschel Space Observatory, due to be launched in 2007.
View »
24-Jan-2022 07:13 UT