ESA Science & Technology - Is it a star? Is it a planet? 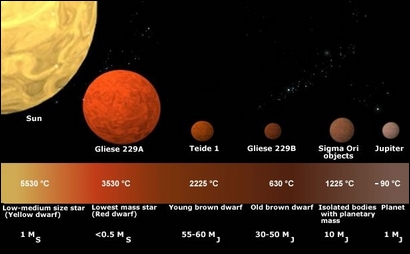 Objects with less than 80 Jupiter masses (80 MJ) never become true stars, they are 'sub-stellar' objects: brown dwarfs and the so-called 'free-floating' bodies of planetary mass. The sizes and masses of sub-stellar objects are not directly related. Giant planets such as Jupiter may be much less massive than brown dwarfs, but are about the same diameter.

Young substellar objects, like 'Teide 1' and the objects in Sigma Orionis, are much hotter than old ones. They are still forming. Once their formation process is over they will probably be the same size as Jupiter. There are not yet any direct measurements of the size of these objects, so astronomers use models to derive them.
[In this diagram MS is the mass of the Sun, MJ is the mass of Jupiter]