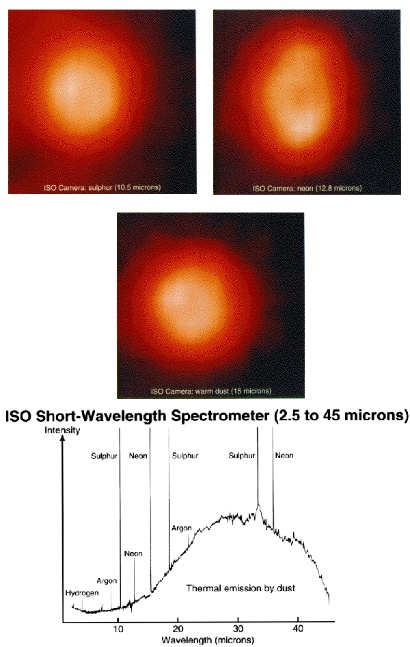 Different Impressions of a Dying Star

Multiple images and a spectrum of a dying star show the value of observations at different wavelengths, with the European Space Agency's new Infrared Space Observatory, ISO. The images come from the Camera in ISO (also called ISOCAM), and ISO's Short-Wavelength Spectrometer measured the emissions across a range of infrared wavelengths. The Earth's atmosphere makes cosmic observations at these wavelengths very difficult - hence the need for Europe's space telescope dedicated to infrared astronomy.

ISO's target is the planetary nebula NGC 6543, lying about 3000 light-years away in the constellation of Draco (the Dragon). A star of moderate size, running out of fuel, fertilizes the surrounding space with chemical elements. The resulting cloud of gas and dust is called a planetary nebula because when astronomers first noticed such objects 200 years ago, they thought they looked like planets.

At 10.5 microns ISO's Camera sees emissions from charged sulphur atoms, suggesting a spherical shell of material expelled from the dying star. But 12.8-micron radiation from charged neon atoms shows the planetary nebula elongated by jets from the poles of the star. At 15 microns, arms of warm dust protrude in various directions, as the ejected matter interacts with material released from the star at an earlier stage. Sulphur and neon are conspicuous in the spectrum from the Short-Wavelength Spectrometer, which shows the intensity of emission at each wavelength from 2.5 to 45 microns. A fingerprint of charged argon atoms is also apparent. The "hump" at the right is due to warm dust in different parts of the nebula, at low but variable temperatures.