ISO SWS Spectrum and Ground-based images of the Red Rectangle

ISO SWS Spectrum and Ground-based images of the Red Rectangle 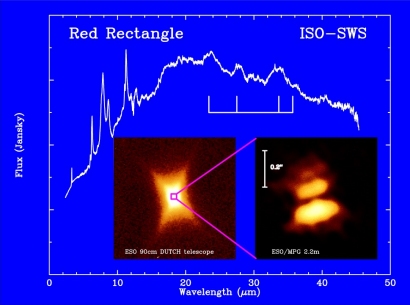 The figure shows two images of the Red Rectangle in red light. The left image was taken by H. van Winckel (Leuven) using the 90 cm Dutch telescope at the European Southern Observatory (E.S.O.), La Silla, Chile, and shows the remarkable X-shape of the nebula. The right hand image was taken by G. Weigelt and R. Osterbart (Bonn) using the 2.2m Max Planck telescope, also at E.S.O., using special techniques to obtain high spatial resolution. The image shows the detailed structure of the innermost part of the nebula. A prominent dark lane is visible across the image, which is due to the disk surrounding the binary system. The ISO-SWS spectrum is shown above the two images. The tick marks indicate the position of the oxygen-rich olivine bands, suggesting that the disk contains oxygen-rich material. This disk may be the site of on-going planet formation.
15-Jun-2021 21:31 UT