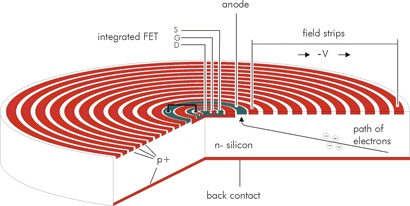 The High Time Resolution Spectroscopy (HTRS) instrument is based around an array of silicon drift diodes (SDD). The SDD is a completely depleted volume of silicon in which an arrangement of increasingly negatively biased rings drive the electrons generated by the impact of ionising radiation towards a small readout node in the centre of the device. The time needed for the electrons to drift is much less than 1 µs. IXO was an L-class candidate mission in ESA's Cosmic Vision programme that was studied between 2007 and 2011.
23-Jan-2020 08:58 UT