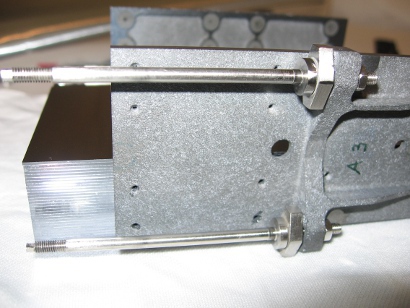 The scientific performance requirements for the International X-ray Observatory (IXO) imply a mirror with a large diameter (about 3.2 m). Using the same technique as employed for the XMM-Newton mirrors would result in a mirror assembly too heavy to launch. Two new technologies are being investigated: mirror shell segments manufactured from silicon pore optics (ESA) and slumped glass (NASA).

This photograph shows part of a demonstration model of an IXO mirror module. Silicon wafers, which have been diced into plates, ribbed and wedged are stacked into a high performance pore optics (HPO) unit using a fully automated stacking robot. Two such HPO are aligned to arc second accuracy using pencil beam X-rays and are joined by mounting CeSiC brackets forming a mirror module in Wolter-I configuration.