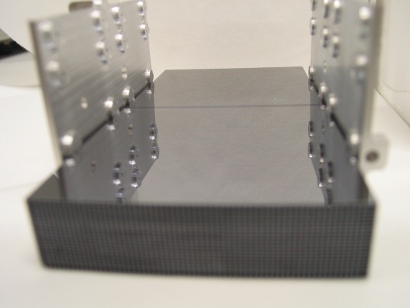 This is an early prototype mirror module, built in 2007, for the International X-ray Observatory (IXO).

Silicon wafers, which have been diced into plates, ribbed and wedged are stacked into a high performance pore optics (HPO) unit using a fully automated stacking robot. Two such HPO are aligned to accuracy using pencil beam X-rays and are joined by mounting brackets forming a mirror module in Wolter-I configuration. For this prototype the brackets were made of aluminium; more recent demonstration models have CeSiC brackets.

Note the high reflectivity of the surface of the silicon plates, made from standard commercially available 12" wafers with a roughness better than 0.4 nm rms.