Close-up of an IXO mirror module in a petal

Close-up of an IXO mirror module in a petal 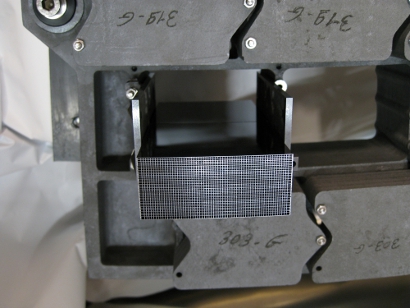 This half-filled mirror module is attached to a demonstrator model of an IXO mirror petal during testing at the PANTER facility in Munich, Germany.

The mirror modules are constructed from silicon wafers which have been diced into plates, ribbed and wedged and then stacked into a high performance pore optics (HPO) unit using a fully automated stacking robot. Two such HPO are aligned to arc second accuracy using pencil beam X-rays and are joined by mounting CeSiC brackets forming a mirror module in Wolter-I configuration. Pins on either side of the brackets are used to secure the modules to the petal.